Sam Heughan and the Porridge Saga

Once upon a time, a kind and generous lad decided to help out the chefs who had orchestrated a marvelous feast the night before by preparing porridge for everyone for breakfast. The enthralled Heughligan lassies in faraway Twitterville were much impressed, adding ‘handy in the kitchen’ to the lists of his virtues. They sent messages to him and to their delight he responded. 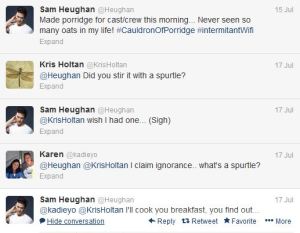 There were unsubstantiated reports that one young lassie may have been quite flustered by the invitation to breakfast and needed to lie down. Her eventual recovery is presumed, though her state is likely to remain besotted for some time.

Meanwhile to add to the general heart palpitations spreading through the Heughligans, graphic evidence was unearthed of our young hero engaged in–brace yourself–washing dishes. Complete with soapy hands, magnificent biceps, and the mysterious presence of duct tape. 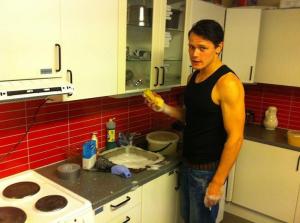 This led to another flurry of exchanges with our hero. 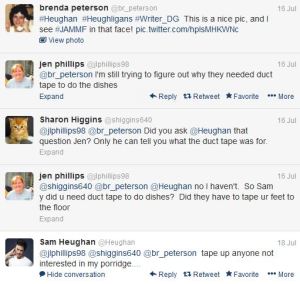 Mystery solved, further discussion ensued as to the relative merits of eating food prepared by our champion versus being restrained by him with duct tape. A verdict was never reached, but it seems there were many volunteers to put it to a scientific test. To honor Karen Deyo for spurring these enlightening conversations, Heidi Burke created the Golden Spurtle.

The Heughligans then decided to recognize the hero of the story and passed the award on to the valiant and patient Sam, and so the Heughligans  presented him the Golden Spurtle World Porridge Making Championship Award. 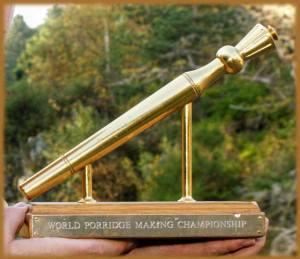 Someone found this lovely Spurtle Ballad, so that we have a soundtrack for our Spurtle banter.

16 thoughts on “Story of Porridge”