On April 17, 2020, Sam wrote this message on his IG Story (See attached photos). The admins of HH wanted to address this statement, as a show of solidarity to Sam and to reiterate it as part of the culture in HH.
When HH began, we wanted it to be a NO DRAMA group. We never in a million years imagined that we would have to add the No discussing the personal life of Sam and Cast rule, because that would be common sense, right?
We soon learned differently when we started this group in 2013. We discovered that former members were discussing in our Facebook group where Sam was, with whom, and what they were going to do about it: i.e.: go and stalk him.
We shut that down quickly, removed those members from the group, and started the NO DISCUSSION OF SAM’S PERSONAL LIFE RULE.
We had held on to that rule steadfastly. In addition, it is also, why we typically do not allow on our Facebook group posts that ask,
“Where is Sam now?” “Why is Sam in… _______________”
Sam has a right to a personal life, just like anyone else. He owes NO ONE any information regarding his travel plans, his companions, if there are any, the status of those companions and his relationship to anyone on the cast.
Being a fan does not give you automatic access to everything that revolves around Sam. It does not automatically give you access to ANY of the cast members on Outlander or any other production that involves Sam. It does not give you the right to discuss anything but his professional endeavors. If you choose to be a fan of someone then you are supposed to be supportive and appreciative of them sharing their craft with us.
Before we allow anyone into our Facebook group we have our members clearly state that they have read the rules. One of those rules states that there is the NO DISCUSSION OF PERSONAL LIFE. We will mute and/or block people from our group for repeated discussion of Sam’s personal life.
We stand by Sam on this statement, and we applaud him for finally standing up to these people who have been harassing him for years. In addition, we will continue to support him for this. We will continue to take a hard stand on this topic, and will continue to remove and block anyone who discusses his personal life, his whereabouts if he has not discussed them himself.
While you may think you are innocent, but some of you spend hours daily reading his twitter and IG to find “CLUES” as to who he is with, or where he is. WHY? Why do you care? What business is it of yours? Put yourself in his shoes. Would you like that same level of scrutiny?
Some of you ask why we seem so tired of being admins of HH. We are not tired of being admins of HH, we are tired that we must continually defend ourselves about our strict rules of the group. From day one we have been criticized for our group rules and stance on no discussion of the actors’ personal lives. We’re tired that regardless of the fact that we have these rules, and you have agreed to abide by them, that we have to trot out ANOTHER post about it and tell grown people to behave.
We also would like to remind you that Cait’s personal life is also not a topic of discussion. Nor is her marriage and if that has “hurt” her scenes with Sam. There is to be no discussion of any of the cast members personal life.
As a final thought, we would ask each and every one of you to take a moment to reflect. Even if you do not think you are a problem, you may be. Even if you think you are not being cruel in your comments directly to him, the fact that you have to know his every movement and you are “Following” clues on IG or Twitter about his friends, shows that in fact, you may be part of the problem. You may not be bullying him, but he deserves his privacy. Think about that for just a minute. Our support as Heughligans does not give us special access to Sam. Our role as Heughligans is to be supportive. To be a Heughligan is to be kind. To be a Heughligan is to be respectful of Sam and all the cast members. If you find that we are overreacting and you wish to still treat Sam and others in this disrespectful way then please do not call yourself a Heughligan and remove yourself from our social media sites. Have a good day.
#WeStandWithSam 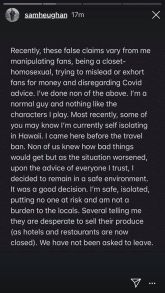 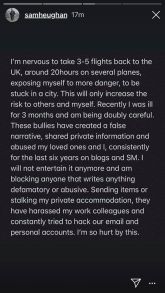 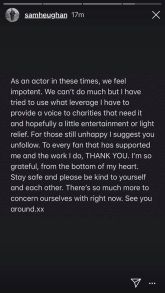