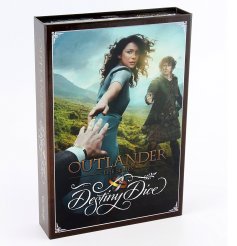 fess that I approached this game with a fair bit of trepidation. Would this combination of two of my favorite things (Outlander and gaming) produce something lovely like dipping strawberries in chocolate or would it be more like trying to read and walk at the same time with lots of tripping and running into things?

Upon opening the box, I thought,  ‘At the very least it’s pretty.’  The cards and dice all have images from the tv show, which certainly adds to the atmosphere when playing. Despite the heavy visual tie-in to the show though, you do not need to know anything about Outlander to play and enjoy the game, so feel free to drag your non-Outlander appreciating friends in.

The rules are fairly simple, which is definitely a plus. Everyone seemed to grasp the basics after one complete round. It did take a few rounds to remember everyone’s special power, but there was a simple chart, so that didn’t slow things down much. The turns move pretty quickly as long as no one in the group agonizes too much over their decisions before acting.

As you’d expect with any game with dice, there is a lot of luck involved, but I found the decisions surprisingly more interesting and meaningful than I expected. It has a little bit of a Yahtzee-like feel since you are rolling a bunch of dice (though 6 not 5) to get sets to score points. But there are restrictions on what you can and can’t re-roll and I often found myself trying to decide if I wanted to keep the sure points or re-roll them and hope for higher combos. These decisions gave the game a push-your-luck vibe that was fun in and of itself and seemed an appropriate mirror to Claire’s constant struggles.

So if you enjoy games and have at least one other person you can get to play with you, I’d definitely recommend adding this to your game collection.

Has anyone else played this yet? Similar or differing opinions?